InfoMutation – we must build bridges between our past and our future

This is a guest post by friend and collaborator René Barsalo, of Montréal.

It is the narrative text for a soon to come infographic video René is working on, seems for years, about the ongoing InfoMutation. Jon provided the English translation and René is offering him the web scoop for this.

Hope you like it, but as René says, with the graphics and soundtrack it’s going to be even more punchy … can’t wait to show it to the world soon.

By René Barsalo, mutant since 1984

We are living through the most important trans-generational media ‘fracture’ ever experienced in history. During the past 100 years, across most developed nations, each generation integrated an additional information technology into its daily life… one not known when the older generation was born.

Yet, regardless of all the innovations in communicating now at our doorstep and our hands, creating a consensus between generations for acting upon today’s societal problems has never before seemed to present such a complex challenge.

We are living through the fracture’s first impacts on collective human sense-making. Each of the generations alive today perceives part of the world differently, depending on how it interacts with our mediated world.

In order to better visualize the size and scale of this InfoMutation, let’s return to the very beginning of the complex system of human communications. 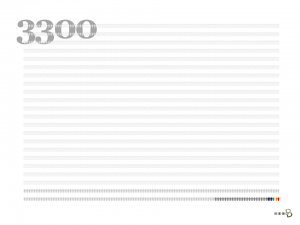 After basically grunting at each other for more than 33,000 generations, the first major transition occurred with the development of speech, which started approximately 3,300 generations ago. Since then, our daily life experiences and concepts generated words, which were transferred orally from tribe to tribe, humans to humans, and thus to our collective memory, generation after generation.

The next major transition occurred with the arrival of text and writing. Both appeared about 300 generations ago, in parallel with the growth of cities and the interactions necessary to carry out commerce. Written texts enabled information transfer beyond face to face interaction, time and space. They were passed about and shared hand to hand, and again from generation to generation. This enabled the cross pollination of ideas developed by scholars and diplomats. Nevertheless, most peoples’ knowledge remained constrained by the limits of shared languages and memory.

About 30 generations ago, the growth of interest in writing and texts was initiated by the arrival of typography and printing. This development increased the scale and speed with which texts could be circulated amongst people of all generations. However, the majority of people still remained confined to the use of oral language and memory, largely because of the limited growth and spread of literacy.

Along came the steam engine and the dawn of the Industrial Age, followed by the development of the combustion engine and the invention of electricity. The industrial revolution ‘centralized’ activities, mainly in factories which were mostly found in urban areas. The public school, a result of an alliance between the state and industrialists, was created to educate future workers in how to read instructions, newspapers and advertising, write reports and pay attention to and respect schedules and deadlines.

This mechanical acceleration of society, more or less consistent over the past century, has brought us to the beginning of the next transition, the electronic one. This new science of sending and interpreting electric signals unleashed the rapid development of a sequential series of major innovations, one generation after the next. This acceleration has brought us the edge of a real fracture between generations regarding how information is consumed and used.

If we estimate the moment when each of these new electronic medias has been adopted by the public at large, and thus taught to our children, the past century has unfolded rapidly and with dramatic impact on one generation after the next, as follows:

And all of a sudden, starting in the early 80’s but growing exponentially since then, the media-based “fracture” has become a yawning chasm and initiated a new transition we still barely explored, the brave new world of digital information and connectivity: 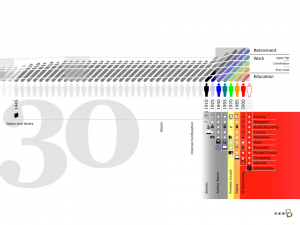 The degree and scope of change of the last century is something we never experienced before at such a scale in human history. No more long periods between major changes, periods of adaptation that allowed us to understand the impacts and then in turn teach and guide our children well. From elders to the very young, the changes in the processes and forms of interpersonal communications are now ongoing and constant.

The following quotation by Marshall McLuhan allows us to understand clearly the scale of the impact of the fracture. “Media, by altering the environment, evokes in us unique ratios of sense perceptions. The extension of any one sense alters the way we think and act — the way we perceive the world. When these ratios change, men change.”

After living through a consecutive series of arrivals of different forms of media and their subsequent integrations into our daily lives, it’s quite normal that each generation actually perceives at least part of its world quite differently from the other generations. Why? Each of them communicates and informs itself with the most recent information technology, but each generation perceives and uses them quite differently.

In parallel, just to add more complexity, innovations in health have more than doubled our life expectancy in the last 100 years, enabling us to reach an historical peak with respect to the numbers of different generations, living and working together in the same society.

With the arrival of the digital era, humanity is now split into two groups: those who only inform themselves and communicate in the physical world, representing almost two thirds of the human population, and those who also inform themselves and communicate in a digital and virtual world, which is essentially invisible and intangible to the first group. 30 years ago the second group did not existed. 30 years from now, they will be larger than the first one.

The generations born before the personal digital era, before 1985, were all educated in a world in which information, once it had been reproduced and distributed, stayed fixed forever on paper, vinyl or film. To access that information, one had to have physical access to the media upon which the information had been printed or recorded.

The generations born after 1985 are brought up and educated in a world wherein each word, each letter, image or location-derived coordinates can be indexed, modified, compared and shared with anyone else on the planet, without being printed, without a recording studio nor a media empire. In order to gain access to that information, the only requirement is access to a network online. Information can appear on a screen, on the wall or on a piece of paper so as to in effect re-appear, later, on the next interface of that day.

Those generations born before 1985 who have in an important sense been forced to realign their habits over several decades, must once again, question a significant part of their worldview in order to integrate the digital mutations being visited upon them. For those generations born after 1985, this brave new world is the only world they have known.

This media-based fracture impacting the generations, and now society at large, is also having significant impact at school and at work. The hierarchical model of knowledge transmission in the familiar top-down fashion is being put to the test on a daily basis with the meteoric arrival and spread of socially-networked human interactivity on vast global platforms like Facebook, Twitter and Google Plus.

In this new era of interconnected digital communication, just as with the beginnings of speech or writing, knowledge is created and disseminated daily. The major and never-before-experienced difference now is that real time is now measured in milliseconds, not moons. Co-creation of knowledge along with self-directed and continuous learning are becoming part of our daily lives.

Even though we are now finding a growing number of pre-1985 generations familiarizing themselves with the daily use of the internet, most of them are following their existing media habits, which they learned growing up: they send mail, and access their books, newspapers, radio shows and television … but in online formats. However, post-1985 generations perceive networks as extensions of their immediate, present-day environment, which enables real-time access to their friends, their colleagues, and to re-programmable technologies and re-usable, re-mixable knowledge … whenever and wherever they are on the planet. They are exploring in deep ways the possibilities of the digital environment, without assets or territory to protect.

Educated to levels never before seen, they rapidly understand the advantages the new set of conditions – interconnectivity and real-time flows of information – offer for new forms of coordinated action. They are demanding a “re-boot”, at least a major digital update of the political and economic systems of our planet. They feel ready to code their future. But those who sign the cheques, those who vote into place the laws and protocols and policies of our society are almost all from the pre-1985 generations. Already overloaded and pre-occupied by the management of daily issues and the growing impacts of rapidly-accelerating ecological, political and economic crises, they have little time to understand and grasp the opportunities of the digital environment. So they keep resisting it and pushing it back till “later”, thus not learning or knowing how to put this new environment into action and into the service of society at large. 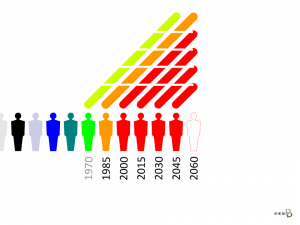 If the ensemble of the managerial class had been educated with handwritten notes, big auditoriums and printed books, the class which will replace them in 30 years will have been educated with screens, interactivity and network-based collaboration. The rules which today regulate our identities, our territories and our economies have all been written for the pre-information-technology physical world… the only one known by humans up until the digital era. This InfoMutation is enabling new ways of interaction, some judged impossible within our traditional views of identity, space and time. The necessary changes for carrying out this massive digital transition are more important than a simple refresh or update.

Our new virtual memory recognizes us already, counsels and coaches us, knows our friends and carries out activities and transactions in our names. But what do we actually know about it? Where I live, as most industrialized countries, 45% of the population has lived at least the first half of their lives in the world of fixed physically-based information, 78% have been born before the arrival of the Web. Yet, the majority of the web natives still cannot vote because they are too young, but not for long.

Now is the time to share between all generations what we value the most of a non digital environment. Over the next several decades, this media-based fracture will close in upon itself when there will no longer be any witnesses to the pre-digital world. At this early stage of the infoMutation, we can still influence our future “digital” code of conduct, and teach our children to value time to think and share ideas and emotions, not just clicks. Some might consider it’s already too late. Others, including myself, consider it’s too late to be pessimistic.

Thus, we have every interest in the world in co-creating our digital future, together, elders and youngest, and assuring ourselves that all stages of human life will be positively encoded into the “great algorithm”, knowing full well, as McLuan once more noted, that “first we shape our tools, and thereafter they shape us”… as did speech, text and electronic before.

René Barsalo, mutant since 1984
This short essay is inspired by the notes and schemas from my “Mutation Notebook” which I keep on filling in by crayon (my type of resistance 😉 … ever since the first computer appeared in my life in 1984.